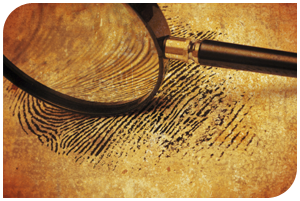 Fingerprint evidence identification, known as dactyloscopy, or hand print identification, is the process of comparing two instances of friction ridge skin impressions, from human fingers, the palm of the hand or even toes, to determine whether these impressions could have come from the same individual. The flexibility of friction ridge skin means that no two finger or palm prints are ever exactly alike in every detail; even two impressions recorded immediately after each other from the same hand.

Fingerprint identification, also referred to as individualization or fingerprint evidence, involves an expert, operating under threshold scoring rules, determining whether two friction ridge impressions are likely to have originated from the same finger or palm (or toe or sole).

Our experts have access to the latest forensic techniques to identify fingerprint evidence, preserve and extract prints from all manner of objects or exhibits. Identifiable marks can then be expertly assessed to help identify a victim, matches against a suspect or to provide investigators with an insight into how the crime occurred, based upon the available physical evidence.

Since the early 20th century, fingerprint evidence and print analysis has been one of the most common and important forms of crime scene forensic investigation. More crimes have been solved with fingerprint evidence than for any other reason. This fact necessitated the need for assailants to cover their hands during the commission of their crimes; thus designating gloves to be the most essential and crucial tool for any successful criminal perpetrator.

Our analysts are experienced in peer-reviewing the work of ‘scene of crime officers’ and providing expert commentary upon conclusions – especially where approximations have been made based upon fingerprint evidence, partial-prints or statistical suggestions made of print impression uniqueness (e.g. 1 in 5 million).

Impressions of fingerprints may be left behind on a surface by the natural secretions of sweat from the eccrine glands that are present in friction ridge skin, or they may be made by ink or other substances transferred from the peaks of friction ridges on the skin to a relatively smooth surface such as a fingerprint card. Fingerprint evidence records normally contain impressions from the pad on the last joint of fingers and thumbs, although fingerprint cards also typically record portions of lower joint areas of the fingers

For casework we employ analysts experienced in conducting fresh investigations, evaluating exhibits and retrieving viable fingerprint evidence, in accordance with Guidelines issued by the Association of Chief Police Officers (ACPO).

We use experts experienced in testing the reliability of fingerprint evidence sampling techniques, commentary on Streamlined Forensic Reports (SFR), considering the prospect of tampering or contamination, and presenting our findings in oral evidence in Crown courts, the Court of Appeal (CoA) or tribunal proceedings.